At this week’s City Council meeting, we seriously grappled with development codes.
The planning department presented us with a number of proposed ordinances but we didn’t adopt any of them — instead we wrestled with both the nuances and the big picture.
Some of our 30-year-old codes dating to Encinitas’ incorporation have been only slightly modified over the decades. But laws change, and the issues that confront us change. Our out-of-date codes need to reflect current realities, and we need to actively manage development in our city with the appropriate ordinances.
Right now, housing affordability is a major problem statewide. Despite what’s frequently repeated about the causes of high housing costs, governmental regulation is not the primary driver of expensive home real estate in our city. Maybe that’s the case in other places, but not in Encinitas. We have some of the highest land values in the county, and people want to live here. If we eliminated all regulatory costs, housing prices wouldn’t go down.
But state housing laws don’t care about our housing costs or what drives the high demand in our city. Many state laws are aimed at getting cities to provide more housing for lower-income people. This is a good idea from a policy perspective. Given that Encinitas doesn’t have its fair share, what are we doing about that? At the policy level, we in the City Council have yet to articulate a clear consensus on Encinitas’ affordable housing goals. We tend to get mired in the complexities that are so pressing at each meeting.
Encinitas’ past approach has been to not respond to changes in state law related to affordable housing. Luckily this is not the approach of the current City Council and our planning staff.
After we’ve defined our end goal regarding housing, we can consider how much the city will subsidize, incentivize, require, or encourage in the creation of this housing, and the legal ways to do that. At our last meeting, the Council requested a workshop with the Planning Commission, community members, affordable housing advocates and the development community to start tackling this difficult, contentious, heavily regulated and complex, and often emotionally charged issue. I look forward to hammering this out. 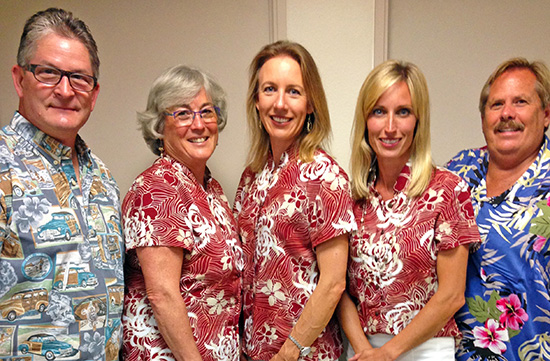 The City Council’s custom is to wear Hawaiian shirts on the first day back from summer break. The atmosphere at city hall felt like a fun family reunion in our tropical splendor.
In other City Council news:
• After a several-hour Planning Commission meeting on Encinitas’ proposed urban agriculture ordinance, the city staff is going to come back with more information for the Commission. We are seeking to balance preservation of neighborhood tranquility with a desire for more locally grown food and agriculture experiences, whether from backyard farms, community gardens, or farmers markets. The process is working the way it should – an idea is developed and then refined through public meetings and engaged discussion. Here’s the Encinitas Advocate story.
• I’m thrilled that our new city manager, Karen Brust, starts Tuesday. One of the most important things she’ll do is oversee a strategic planning discussion in September to prioritize and focus the city’s work. We need a road map. With limited time and money, we must prioritize some of the following issues and projects: providing more legal and safe railroad crossings, Leucadia’s streetscape project, stabilizing the Beacon’s Beach access point, sidewalk, bike lane and crosswalk projects at schools and throughout the city, pre-paying pension liability, a stronger focus on our Climate Action plan, an increase in the number of law enforcement personnel, and many other issues.
• Hobbyists flying drones, many with mounted cameras, have become a local issue. A speaker came to city hall to express his concern about drones when one scared his young son at a local park. When the father asked the owner to stop flying near him, the drone owner said he had a right to fly there. In an earlier incident at Moonlight Beach, a man who threw his shirt at a drone was initially charged with felony vandalism, spent eight hours in jail and had to post a $10,000 bond before the charges were dropped.
These incidents bring up a number of important issues: What are the expectations of privacy in public and private places? Do nuisance laws apply? What are our existing regulations regarding motorized vehicles of any type in public parks? What are our enforcement procedures when someone reports the destruction of a drone or any other motorized vehicle? Other governmental bodies have already weighed in on drone regulations, and despite the implications in the attached articles, it would be premature to be asking for local regulations at this point. We want to keep informed and on top of this emerging issue, and know more about the legal landscape to understand the context of these disputes.
Here’s a Union-Tribune story on the city’s recent request for more information, one from the Encinitas Advocate, a Union-Tribune article about the Moonlight Beach incident, and what the U-T‘s Logan Jenkins thinks about the issue.
Yours in service,

P.S. After recently reading Doris Kearns Goodwin’s book, The Bully Pulpit, about the presidencies of Theodore Roosevelt and William Taft, then visiting Washington D.C. with my family, I’m more inspired than ever about the ability of our American system to respond to the important issues of the day, at both the national and local level.
“Do what you can, with what you have, where you are.”
– Teddy Roosevelt

A thank-you to the North Coastal Sheriff Station Senior Volunteer Patrol, who we recently honored for their important volunteer work at Paul Ecke Elementary school. They assist deputies in traffic management around schools and at accident scenes, check on residents’ homes during vacations, write tickets for those parked illegally in disabled parking spots, among other important things. Thank you to the 41 volunteers in Encinitas for your dedication to keeping our community safe!