Last Wednesday the Encinitas City Council held meetings in open and closed session for seven hours, with only minimal breaks, but I find the work so interesting that I don’t mind the long time spent in a chair. The deliberative process of government can seem tortuously slow when watching it as a member of the audience. But actually doing it, the pacing seems like the right speed, and at times I even feel rushed to make a decision!
Here’s some of what we were up to:
Settling the Building Industry Association’s Lawsuit Against the City
In closed session, the City Council voted to settle a high-profile lawsuit (3-2 vote, with Council Members Tony Kranz, Lisa Shaffer and me voting to settle). For me, this was the fiscally responsible decision given that we were faced with a lawsuit that we could not win. The principles that created the lawsuit were worthy – before I was elected, a unanimous City Council changed rules to make it harder for high-density developers to build out-of-scale projects in Encinitas. But Council changed the rules at one emotion-filled meeting, in ways that were inconsistent with state law. And we got sued.
Continuing to fight on principle is a waste of taxpayer money, especially because we can accomplish most of our goals by settling the lawsuit, rewriting our city’s ordinances and clearly directing the staff that interprets those ordinances. Having a judge make decisions about our future is not ideal, and it’s inexcusably wasteful. The Building Industry Association has already spent $200,000 and the city has spent about $120,000 in legal fees.
Here are some of the reasons we couldn’t win the lawsuit:
Policies have to be adopted by ordinance (and come back for a second reading at a subsequent meeting), not by motion as was done at the July 2014 meeting. Also, it’s illegal to require that affordable units be at least 75% the size of market-rate units or 1,500 square feet, whichever is greater, because this applies unequal standards to affordable units versus market-rate units. Instead of blanket requirements, the city needs to accomplish its goals by considering projects individually. Legally, we can require that affordable units be “comparable” in size and “integrated”, we just can’t specify that size. This makes it the city staff’s responsibility to ensure that the affordable units are adequately sized.
We also can’t apply rule changes retroactively, which means that six pre-existing “pipeline projects” will be allowed to proceed under the old rules. The cumulative total effect of applying the old rules is that 68 total units could be built instead of 63 units. Five additional units across six pipeline projects is a fairly modest impact, although I know it was symbolically important.
State law requires us to have a legally compliant, certified housing element and we don’t have one. We haven’t updated ours for 23 years. There is no legal defense to this. In the settlement, we agree to update ours.
Some of this seems arcane, but in the urban planning world these details really matter.
I hear the community. The City Council hears the community. New housing must be high quality, with a scale, massing and density that fit the existing neighborhood. We are doing everything we can within the confines of the law to change the rules and the practices in Encinitas to accomplish this.
The bottom line is that change is happening. The biggest win for the city in the settlement is that we are still rounding down on base density. This is a big deal. Both sides have reserved the right to pursue this in court at a later date because it is an unsettled area of the law.
The city has been operating with outdated, out-of-compliance ordinances. To remedy that the city is introducing new density bonus and inclusionary ordinances and new rules related to net acreage within the next month. Inclusionary ordinances require that a certain percentage of new housing be affordable for people with low incomes. Net acreage has to do with the amount of buildable land after accounting for things that take up space, such as water retention basins for runoff.
I know some are unhappy that we settled this lawsuit, and it’s regrettable that there’s a vacuum of information right now because we did not simultaneously release the new density bonus and inclusionary ordinances, as I had hoped we would. But hemorrhaging money on a losing lawsuit is not good governance and it’s not leadership. It’s better to make internal changes, get out of court and regain control of our city. Here’s a Coast News article about the decision, and here are the bullet points that the city released.
The lesson I’ve learned is that whenever possible we need to make required internal changes, both to official policies and established city cultural norms, before the Council finds itself legislating technically complicated changes after many hours of emotional testimony. I agree that sometimes important decisions are worth the risk of a lawsuit, but if we can accomplish most of the same goals without risking a lawsuit, that’s certainly better.
New City Manager (finally!) and Transportation Planning 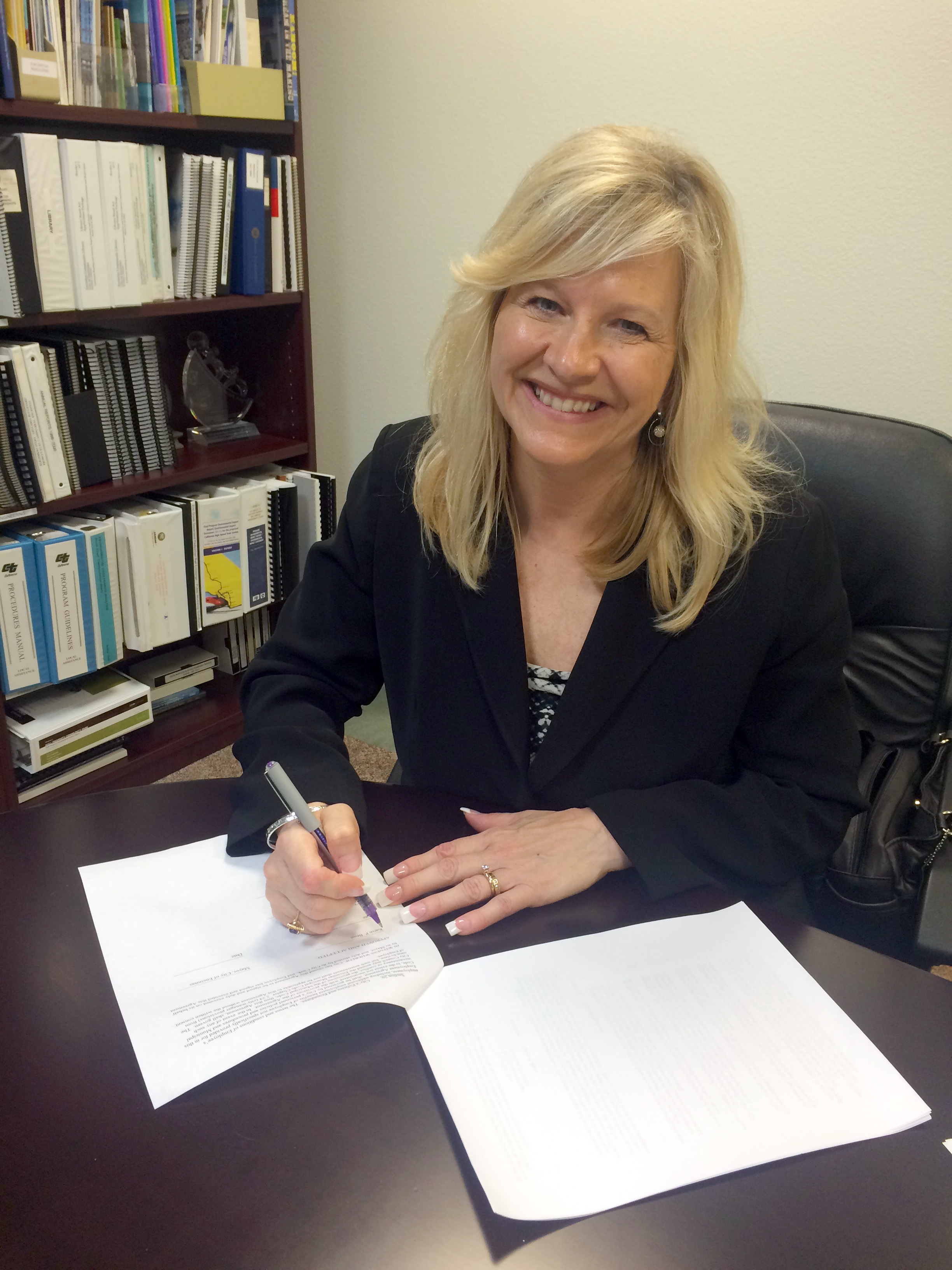 I’m thrilled to have new City Manager Karen Brust start work on September 1. Here’s the city’s press release and here’s a Coast News article. (In the picture she’s signing the employment contract after spending five hours with the Mayor, the city attorney, the risk manager, and me hashing out the details.) Karen was the former CEO-equivalent in San Juan Capistrano and Del Mar and was a standout during the interview process. We unanimously selected her. It’s remarkable how many times in a week I now think, “I can’t wait for Karen to start so we can work on … [this or that issue or project].”
One of the things we need to work on is transportation planning in our city. At our last meeting, Council Member Tony Kranz initiated a discussion about the fact that our “transportation element” or the section of the city’s general plan that deals with transportation, is woefully out of date. It’s difficult to stomach the fact that we continually talk about the state requirement to add housing density in Encinitas, and yet we don’t talk at all about the transportation required to get those new people around. We directed staff to put their heads together and get back to us about plans for updating the circulation element.
The Cardiff Fire Station
For now, we’re keeping the former Cardiff fire station on the corner of Birmingham and Mackinnon. It’s been vacant for two years and in January, the City Council directed staff to appraise the property and solicit offers to sell or lease it. I feel very strongly that it’s short-sighted for us to sell currently unused property. We simply don’t know what the future holds and what our city’s needs might be years from now.
A well-rounded financial portfolio always involves a mix of investments, and owning property is a forced saving plan. Ocean-view land in Cardiff is only going up in value. If we sell the property, the half million dollars we’d make on it would be consumed, not saved, and that investment would be gone forever. Additionally, acquiring new properties is always politically fraught, expensive and contentious. Why not keep the properties we have? Sell them later, if we need the money, or if we have a better investment idea.
Some of my colleagues stated that they don’t want to be residential landlords, and in my mind that’s why we’d hire a management company. We hire outside companies to pick up our trash, trim trees in parks, and do all sorts of things for the city, so let’s hire a company to manage leasing. Some cities, such as San Marcos, do it routinely. My colleagues had a wide range of views, and we worked our way through a variety of different possibilities. 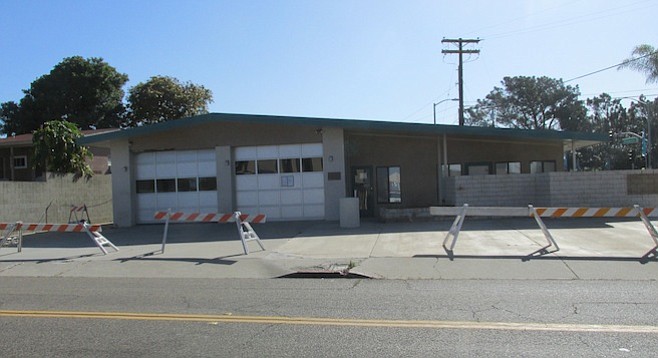 The property is currently zoned public/semi-public, but it’s in a residential zone and a residential use would be a better fit for the neighborhood.
(Photo of the old fire station by Ken Harrison)
After a friendly and respectful discussion, we settled on a 4-1 vote (Gaspar voting no), to lease the property now to Air Care International, a medical transport company and have the city pursue rezoning the property for residential use. I think this solution is a great compromise and the best decision — it leaves the city with lots of options.
And the choice of a tenant seems like a good fit for the neighborhood. The husband-wife team who own the company and work as registered nurses would park an ambulance in the existing fire station garage and, for example, pickup a patient at the airport and drive that person to the hospital. Their pickups are scheduled and non-emergency, so they wouldn’t be racing around the neighborhood. No lights and sirens, no medical care provided on-site, and no commercial signage outside the property. Also, the tenant would spruce the place up, which it needs. Here’s a San Diego Union-Tribune article about our decision.
Since Prop. A passed two years ago (which requires zoning changes to be voted on by the people, not decided at City Hall), no properties have changed zoning. Having the city take this property through a rezone will be an interesting test case.
Environmental Stewardship
Of the practices that seem unsustainable to me, filling our land with 1.4 million pounds of trash a year nears the top. It’s like dumping garbage in our oceans. Because of this, the City of San Diego is considering adopting a Zero Waste Plan that would set incremental goals to achieve zero waste by 2040. This San Diego Union-Tribune op-ed co-written by Encinitas resident Jessica Toth, the director of a regional recycling non-profit located in our city called the Solana Center, lays out a forward-looking plan.
The authors state, “Zero waste is possible through a combination of business incentives, policy changes, increased sorting compliance, innovation and new enabling technologies.” Like the City of San Diego, the City of Encinitas could also be a leader in this area, and hopefully we will start with improving our approach to the disposal of green waste, i.e. plant trimmings and food composting.
Pacific View Update
Progress continues toward creating a community arts center at our historic Pacific View property. This week, the city formally invited potential operating partners to submit their plans for the site and scheduled a collaboration workshop where prospective operators and tenants can meet. There’s more information at SavePacificView.org.
With much gratitude for your continued interest,