Encinitas’ Congressman Darrell Issa has apparently relented under the non-stop pressure and finally agreed to meet with his constituents, holding town hall meetings with the public yesterday and meeting with a few elected representatives, including me, from cities within his district about 10 days ago. Issa is the Republican U.S Representative for our local 49th congressional district, which spans parts of northern San Diego County and southern Orange County. (Here’s a San Diego Union-Tribune article about Issa’s meeting yesterday with the public.)
Over a month ago, I drafted a letter to Rep. Issa on behalf of 13 elected officials in his district, requesting a meeting to discuss concerns raised by our local residents that our congressman is uniquely positioned to addressed. After at least a half-dozen outreach efforts with him and his staff, he scheduled the meeting with less than a day’s notice, at his Vista office on March 3 at 10 a.m. As a result of this last-minute invite, only four of the 13 could make it. I was one of those four.

Congressman Issa is very skilled at turning a conversation toward his preferred topics and drowning the listener in the minutia of the topic at hand. He repeatedly said things like “have you read the budget authorization document on xxx? Because I have,” which was aimed at establishing his dominance and insider knowledge about the way Washington works. Make no mistake — he is a seasoned and skilled politician who knows how to direct a conversation.
Because Darrell Issa is our current congressional representative and has been in Congress for 16 years, we need to closely follow how he uses his political influence. His party now controls both houses of Congress and the White House, which allows him to directly affect policy.
From what I have observed so far, Issa has supported everything proposed by President Trump – his supposed maverick streak is no longer in evidence.
But having won last November’s election by a scant 1,621 votes in Orange County (he lost in San Diego County), Issa understands his vulnerability in the 2018 contest and is currently going out of his way to attempt to re-position himself as a moderate.
He has actually modified his position on certain issues because of intense constituent pressure. For example, he recently joined the “Climate Solutions Caucus,” a group of mostly coastal members of Congress from both parties who represent states affected by sea-level rise. Joining this caucus now, after repeatedly voting against congressional bills related to clean water, conservation, clean energy, drilling, endangered species, national monuments, and protecting forests, smacks of political opportunism. Nonetheless, it puts him in direct conversation with other leaders who have an environmental commitment, and this is a positive step. Check out the League of Conservation Voters scorecord on Issa’s environmental voting record, which gives him a 4 percent lifetime score and a 3 percent from 2016. This scorecard is the standard-bearer on the environmental record for all members of Congress. Here is a Union-Tribune article about him joining the Climate Caucus.
Words are one thing, but votes are what matter. All our ongoing efforts to hold him accountable are critical. We will continue to be vigilant in watching his actual votes. If you have any comments you’d like to offer our congressman, his Vista office number is 760-599-5000 and his D.C. number is 202-225-3906. He repeatedly says that he wants your opinion, so don’t be shy.
Community Choice Energy 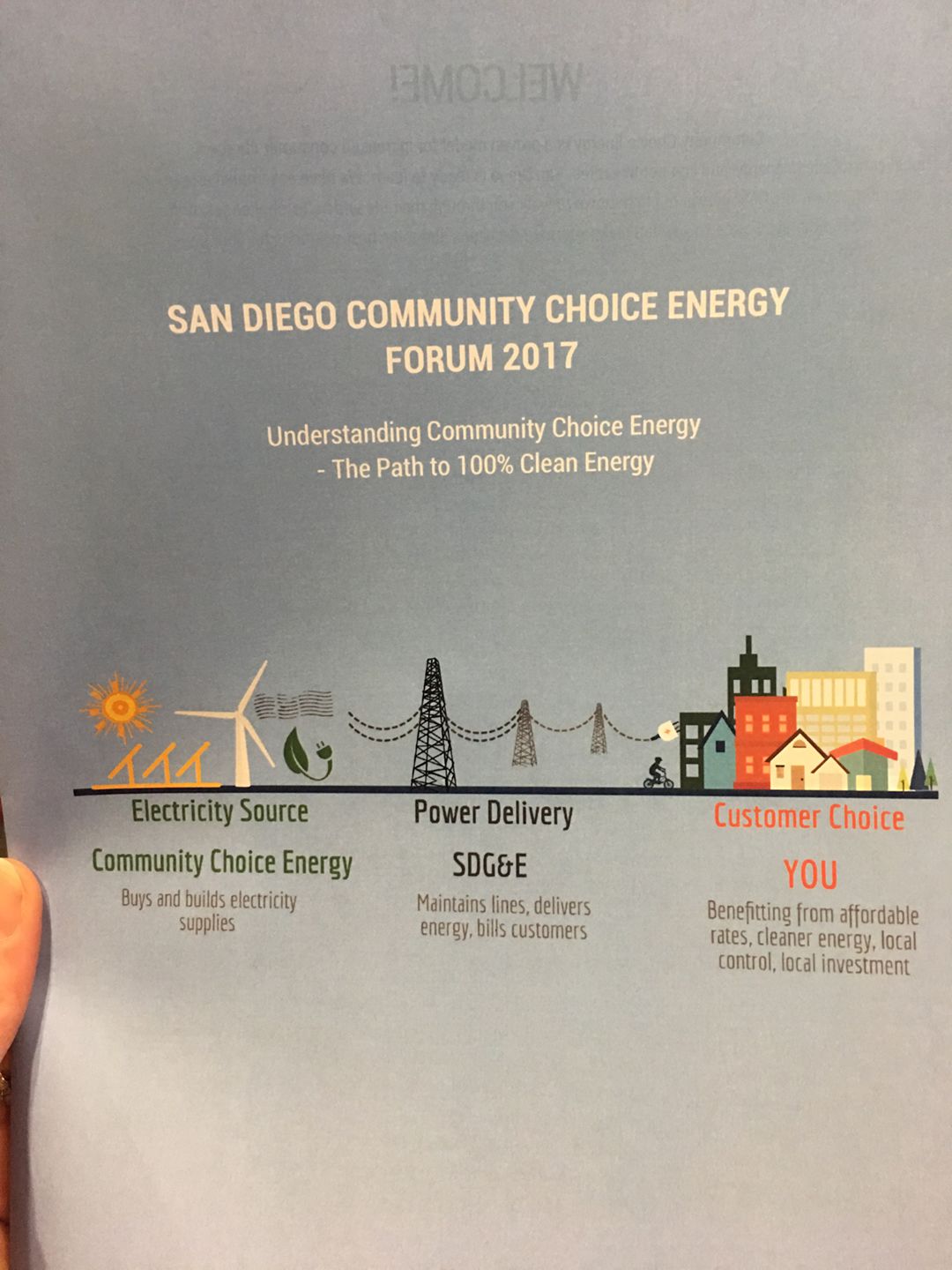 Our city’s environmental goals depend upon reducing the amount of carbon produced in Encinitas, both from the private and public sectors. For most cities, the fastest way to reduce the amount of carbon produced is to switch the type of energy they use from fossil fuels to renewables. On Friday, I attended a one-day forum on Community Choice Energy (CCE), which would allow residents to buy power generated exclusively from renewable sources, like wind or solar.
Running our own power company is not something the City of Encinitas would do alone. Even if we teamed up with other cities, it would still be a major undertaking. It’s like figuring out how to structure and run a waste water district, fire department, or a school district.

This chart from the CCE forum shows that most of the carbon reduction in the City of San Mateo came from using renewable energy sources like solar and wind power from the CCE and not from things like composting, or using mass transit instead of cars.
Progress is incremental. The subcommitee of Councilmember Tasha Boerner Horvath and me, together with Environmental Commissioners Jim Wang and Leah Bissonette, are in the early stages of organizing with other potentially interested cities (namely Del Mar, Solana Beach, Carlsbad and Oceanside) to see what the economics for consumers and the city would be. Nearly all the speakers reported that consumers and cities save money when the power system involves competition. The take-away for me was that consumers don’t get the best price when a monopoly controls the power (the system we currently have). And giving residents options results in more renewables being used by both the utility and the alternate energy providers.
Some California cities and counties have been using community choice energy for years, but it’s still a new idea for the cities in San Diego County. County supervisors recently voted not to pursue it at all, which means we unfortunately won’t be seeing leadership at the county level. Our supervisor, Kristin Gaspar, wouldn’t even support a feasibility study on the idea, according to this Union-Tribune article. This is a disappointment because it would be preferable to evaluate this concept as an entire region, similar to the transportation planning we do through the county agency of SANDAG.
In other counties, the cost savings and green benefits associated with community choice energy have generated bipartisan support. Like all changes to the status quo, there are fits and starts. I believe that continued passionate advocacy from a broad base will eventually turn the tide on this in our county.

It was a pleasure to hear from climate action champion Nicole Capretz at the Community Choice Energy Forum (above) along with other engaged participants (below).
News from this week’s City Council meeting

In closing, I’d like to say something about our communication. An open, ongoing conversation with Encinitas residents is crucial for me, so it’s personally frustrating that I’m sometimes unable to respond to every email I receive. I do read each of them and so appreciate all the well-considered feedback, but the sheer volume makes personal responses to every one practically impossible. I hope you understand, and I encourage you to stay in contact with me regarding local issues that are important to you!
If you want to meet with me regarding a specific topic, please schedule an appointment through Brandi Lewis at [email protected].
Next week we don’t have a City Council meeting, but I’ll be sending you my Sunday newsletter about housing issues in Encinitas.
Thank you for your continued interest,

“We must especially beware of the small group of selfish men who would clip the wings of the American eagle in order to feather their own nests.”
– Franklin D. Roosevelt