What a great first week!

I was sworn in, unanimously appointed to be the Deputy Mayor and the next night had my first (five-hour!) City Council meeting. The City Council atmosphere felt positive and cohesive to me, with the individual council members working well with each other and the city staff to get the city’s business done. It’s so much easier to accomplish tasks in an environment of collaboration and good will. I have genuinely positive feelings toward all four of my colleagues, and look forward to the time we spend together on Wednesday nights. I aim to maintain this, even when we have our inevitable differences.

One interesting observation about sitting on the City Council dais is that it’s not entirely clear who to speak to in making decisions and offering commentary. By state law, the Council meeting is designed for elected officials to do the city’s business in public (instead of behind closed doors), so it’s our only chance to talk to each other before voting on the matters before us. But the Council chambers are oriented as if we’re talking to the audience — and it’s the public’s trust, and public’s money, that’s at stake. The reality is the city staff is doing the heavy lifting of the actual work, so there can be a tendency to have a dialogue back and forth with the city staff because they are the subject matter experts. It’s an interesting juggle. 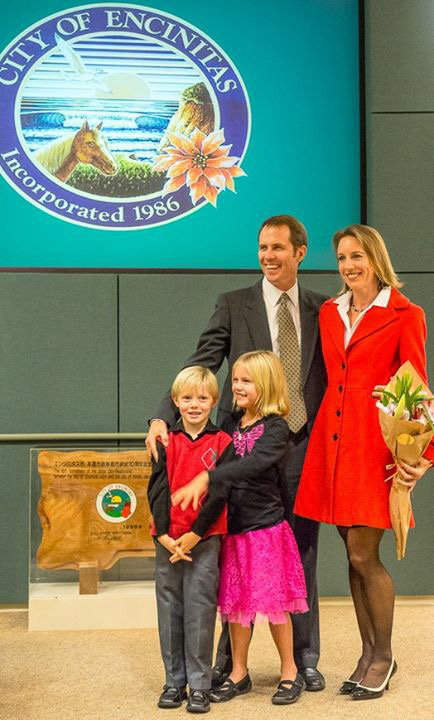 At the end of the meeting, I requested a future agenda item to address the public health issue that arises when city parks double as dog parks during specific hours. I’d like to see a half fence, or other demarcation, around the playground equipment and sand boxes to keep dogs off areas where kids play. Both Orpheus and Viewpoint Park are considerations for this pilot project. The rest of the Council seemed to agree this was worth looking into.

At tomorrow night’s (Wednesday’s) meeting, here are some of the issues we’ll consider:

Thank you for your interest in the city of Encinitas! Please forward this email to anyone interested. Send me an email stating “Add me” and I’ll include you on my email list.

With much gratitude for your trust in electing me to the City Council,

(At right, our historic Ecke poinsettia bush is in bloom!)

Have you noticed how trashy it is on our freeways? It’s an aesthetic and environmental blight in our region. Apparently trash blowing out the back of trucks is a major source of this freeway litter. Today I joined #Caltrans and important volunteer organizations to hand out tarps to those arriving at the Otay landfill and encourage drivers to “Tarp Your Load.”Learn more about litter abatement efforts, the committee at SANDAG aimed at helping remedy this problem and ways you can help keep the region’s highways clean 👉 bit.ly/2KP7cA8 We can do better! #BuildNCC #KeepSanDiegoMoving #5BigMoves #SDForward #SANDAG #Caltrans #TransNetSD #ILoveACleanSanDiego #surfrider #CHP ... See MoreSee Less

This #WomensHistoryMonth, I want to recognize the importance of great women in leadership positions! Encinitas' very own Assemblymember and my dear friend Tasha Boerner Horvath is a tireless champion for the families of Assembly District 76 and we are proud to have her represent us in Sacramento. When Tasha Boerner Horvath brought her passion into my city hall office trying to figure out how to get a stop sign installed I thought this gal should sit at the table with us! She dominated her City Council race with her grit and gusto; and now she’s a success in the legislature. Tasha brings heart, savy and a lightening fast mind to any conversation. Thank you Tasha for your service! ... See MoreSee Less

I would not be here today without the strong women in my family who are my foundation and my inspiration. They’ve always modeled the importance of hard work, family, and service. Thank you to my grandma, my aunt, my mom and my sister. #WomensHistoryMonth” ... See MoreSee Less