Lots of items were packed into our last City Council meeting of the year. Here are some highlights. 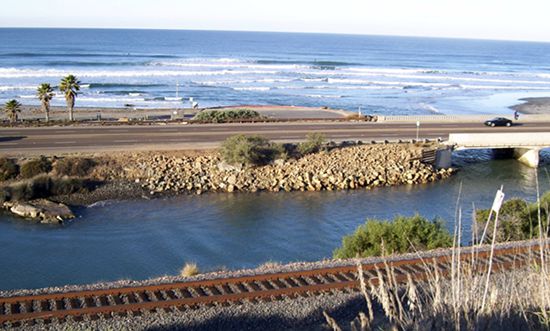 The city has already repaired the Highway 101 damage caused by the high tides in Cardiff. The newly placed rocks, or rip rap, armor the shoreline against water erosion much better than sand.

Encinitas has struggled to find a way to manage a category of housing called “accessory dwelling units.” These are smaller, often older, structures, sometimes converted garages or sections of homes that have been walled off and have their own kitchens.

I’m particularly concerned about finding reasonable regulations that maintain these accessory homes in our city for three reasons: 1) they’re an important part of our housing supply because they are affordable, unlike most other housing in Encinitas, 2) they are part of our city’s history and community character; 3) they provide an important income stream for many homeowners on fixed incomes.

The city has implemented three different programs over the last 30 years, trying to deal with the complications that accessory units present. Many accessory units exist in a shadow regulatory zone because they aren’t legally permitted. This subjects owners to code enforcement complaints. For some, there is no reasonable way to make an accessory unit compliant with current zoning standards, perhaps the ceiling is too low, or setbacks aren’t large enough.

The city recently completed a messy, protracted and difficult negotiation with two longtime residents over their accessory unit. Their case and other cases have previously been litigated in court. At public hearings, the City Council has heard impassioned pleas from owners seeking a solution.

Currently about 200 of these accessory units have “amnesty” because they have become involved in one of the city’s programs. If the Council didn’t act before the end of the year, 164 of these units were going to have their amnesty expire.

If we can legalize the units (with certain conditions), the city can get low-income housing credit with the state, and that means fewer city parcels have to be upzoned for higher density housing.

All around, I feel we can do better in this area. We can balance the city’s legitimate interest in health and safety with the desire to preserve our accessory units for the benefit of low-income residents and property owners.

We need to apply a standard of reasonableness to our zoning code requirements. Virtually all existing buildings in the city don’t meet current codes, because codes are continually updated while buildings are not. But this doesn’t mean the homes are unsafe. Longtime resident advocate Bob Bonde pointed out by way of example that while our fire department requires sprinklers to “legalize” an accessory unit, the state code allows an exception to this requirement for existing structures. The city could allow the less onerous option.

My Council colleagues supported my suggestion that we send this topic to the city manager to analyze and present us with possible solutions. We’ve had a change in staff since the last effort at an amnesty program, which netted a total of only 6 participants. With some focused attention we can come up with a better program.

At our meeting, we also voted to extend the amnesty program that was scheduled to expire at the end of the year. This should relieve some of the anguish I’ve heard from property owners concerned about the legal status of their units. The extension is for six months, during which time we expect to arrive at a longer-term solution. 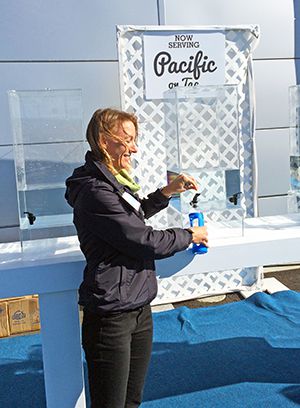 Filling my water bottle with sea water turned into drinking water at the opening of the Poseidon desalination plant this week (it tasted just like drinking water!). With the slogan “Now Serving Pacific on Tap,” the Carlsbad-based plant is the largest in the western hemisphere. The nearly 700 people who attended the plant opening, including me, were very impressed. While recognizing that this is not the only solution for our thirsty county, it seems smart to invest in infrastructure that utilizes the resource we have most abundantly – ocean water. The less we depend on water from the Sierra snowpack and the Colorado River, which will always be very far away from San Diego County, the better. (Here’s a San Diego Union-Tribune article on the event.)

The City Council previously authorized $50,000 for a parking study to determine whether we have a parking problem in the coastal areas and downtown. Some council members feel strongly that there is a problem, but I’m not so sure. Sometimes parking isn’t readily available right outside the shop you want to visit in downtown Encinitas, but it’s usually available within a block or two. I like that Encinitas has free parking, and I fear charging for parking would hurt local businesses. But I’ll keep an open mind.

At the Council meeting, the engineering department requested more than $100,000 for an expanded parking study. I balked at this. The biggest problem from my perspective is that we appear to lack a cohesive approach when it comes to the whole category of transportation, parking, roads and traffic congestion management. Some other Council members appeared to agree with this. An a la carte approach to spending money on expensive, outsourced studies doesn’t make sense. Whatever we spend on consultants we can’t spend on capital projects like Leucadia Streetscape and Beacon’s Bluff replacement.

In the end, we agreed to Deputy Mayor Shaffer’s suggestion to authorize the city manager to dedicate up to $75,000 for a parking study, but only after receiving an analysis of how this study fits in with the Circulation Element update, the roadways master plan, and other studies related to our roads and transportation. I look forward to the city manager returning with a big-picture view of the situation and an integrated approach to the many tentacles of our transportation octopus. 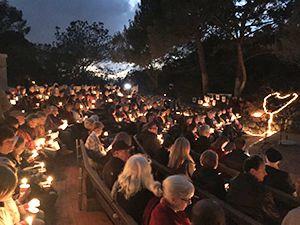 I was honored to speak at a gun violence vigil at our church, the Unitarian Universalist Fellowship of San Dieguito, last weekend. About 150 people came to hear ideas for changing the American culture of tolerance for gun violence. Gun injuries, like automobile accidents, are created by people, and we effectively regulate drivers and cars to make them significantly less lethal. We require drivers to have licenses, buy insurance, and the cars themselves have a host of safety features like airbags. As another example, we also effectively regulate tobacco, specifically who can use it and where it can be used. With 33,000 Americans killed by guns annually we need sensible regulations for those who use and own these deadly weapons. I like the idea of gun owners needing to buy a liability insurance policy in case their gun hurts someone else, just like car insurance is required for drivers. Deputy Mayor Shaffer asked for a future agenda item at our City Council meeting regarding possible zoning code amendments that would limit the areas where guns and ammunition could be sold in our city. The regulations could be modeled after zoning restrictions for adult entertainment businesses, which are prohibited near parks and schools. (An Encinitas Advocate article about the vigil is here, and a story printed in the Union-Tribune from the Washington Post about how guns are now killing as many people as cars is here.)

The City received a clean audit for the last fiscal year from an external auditing firm, with both contingency and budget stabilization funds fully funded at June 30, 2015 and additional money available in the undesignated general fund reserve. Our finances and bond rating remain excellent.

At our meeting, Council Member Tony Kranz brought up the White House’s initiative for cities to be “Welcoming Communities”, helping with immigrant and refugee integration efforts. Kranz and Deputy Mayor Shaffer were unanimously appointed to a subcommittee to investigate. (Here’s the Encinitas Advocate story.)

The City of Encinitas was chosen as a “Crown Community” by American City and County Magazine for the organically managed park and the fruit orchard at Glen Park. It’s nice to have recognition when the city is innovative, creative and forward thinking.

Here’s more information from the Encinitas Advocate on the mediation program the City of Encinitas introduced last week.

Merry Everything and Happy New Year to you and your family!

With gratitude for our many blessings here in Encinitas,

Thank you to the Leucadia 101 Main Street Association for hosting a delicious holiday party at local sushi restaurant HapiFish. It was lovely to chat informally with this important community group.