Supporting the coastal rail trail through Cardiff has turned into one of the most controversial issues of my first year in elected office.
This project will be a biking and walking path that is completely separated from automobile traffic and will connect downtown Cardiff with downtown Encinitas inside the rail corridor.
About six months ago, I was part of a City Council majority that voted to put the coastal rail trail on the east side of the railroad tracks — the side where people live. The great benefit of this placement is that people will be able to leave their homes and walk or bike on the rail trail to dine in downtown Encinitas, shop at Seaside Market, visit our libraries or the Wednesday farmer’s market, among many other activities in both towns.
Right now these short trips are almost always made by car because we lack an infrastructure that makes biking and walking comfortable.
I strongly support this project, and voted for it with enthusiasm. I believe it will greatly enhance the lives of our residents. There are no current plans for the City Council to revisit its rail trail decision, which was made after multiple public meetings spanning many months. This week rail-trail supporters started a website (www.yesrailtrail.com) after an anti-rail trail website (www.norailtrail.com) was started the week before.
The result has been a flurry of emails, internet postings, and newspaper articles. I’ve been involved in phone calls, meetings and discussions, both online and in person, with many interested people.
(Here are some rail trail-related newspaper articles in The Coast News, the Encinitas Advocate, and a San Diego Union-Tribune story written before the pro-rail trail group had organized. And here’s an overview of the rail trail project and a diagram, both from SANDAG.) 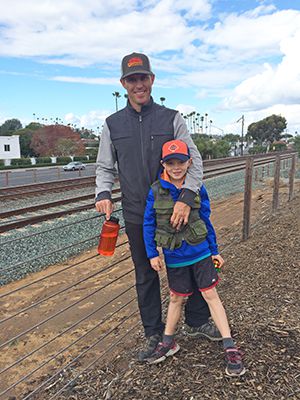 My husband Jeremy and son Oliver next to the fence recently installed as part of the Santa Fe pedestrian crossing at Swami’s.
While I strongly support the project, I don’t downplay or minimize the tradeoffs. They are real. The biggest one is the required post-and-cable fence. Because this project takes place in the rail corridor, the railroad operator, North County Transit District (NCTD), is unequivocal in requiring a fence. It’s not a 6-foot chain link fence as used to be required for projects like this but a low-profile, visually appealing post-and-cable fence, like the one in the picture at left.
Personally, I would prefer the project not involve a fence, but we don’t have that option. The North County Transit District has never allowed a project in the rail corridor that invites people into their right-of-way without requiring a fence; there are no exceptions. Legal precedents confirm the railroad operator’s right to control what happens on its property. It’s not the city’s choice to make.
Along with the rail trail, the city is planning a legal, safe, at-grade pedestrian crossing at Montgomery Ave., right across from Cardiff School. This is a natural flat spot, the site of a car crossing in the 1960s. 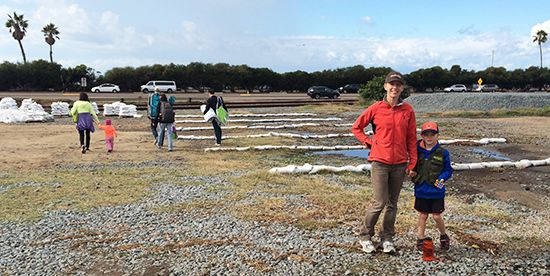 We’re standing at the future Montgomery crossing on the Friday after Thanksgiving, while a family crosses the tracks behind us. The community needs a safe, legal crossing in the 1.5 miles between Chesterfield and Santa Fe.
NCTD recently shared data showing that since 2012, there have been 12 rail “strikes” in Encinitas, 10 of them fatalities. This number includes suicides, which are not separately tracked. In the first ten months of 2015, there have been eight “near miss incidents” which resulted in a train braking or changing speeds. There have also been nine citations for “trespass.” Those unlucky enough to get caught crossing the tracks have reported receiving a ticket for more than $500 and being charged with a misdemeanor, which is in the same category as a DUI or carrying a concealed weapon.
There is a lot of debate about what these statistics mean – how big a hazard are the railroad tracks?
The most important thing for me is that, we need more safe, legal crossings, in Cardiff and Leucadia. While many people cross the tracks illegally, many more won’t do it. Some don’t feel safe or comfortable scrambling over rocks, tracks and highway, some don’t like to trespass and break the rules, and others don’t want to risk that pricey ticket. Arguably it’s more dangerous to cross Highway 101 than the tracks because cars swerve, whereas trains don’t.
In any case, places for pedestrians and bikes to legally cross the tracks are infrequent in our Encinitas corridor, and this rail-trail with a legal crossing brings us closer to a solution. Not only does it create a legal crossing of the tracks at Montgomery, but adds a signalized crosswalk at Highway 101, similar to the one at the Swami’s pedestrian crossing.
Some people who live on San Elijo Avenue are concerned about the reduction in parking across from their homes. Currently cars park haphazardly in the dirt rail corridor, which is never the most efficient use of space. The rail trail project provides parallel parking on the road and additional parking around the Montgomery crossing. I think this will improve the situation overall, but it will be a change for some who may have to walk a little further to their cars. Parking will remain free. 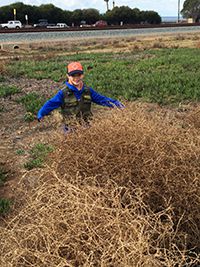 Oliver demonstrates the large size of the tumbleweeds.
One aspect that’s important to many citizens who have written to me relates to the altering of a wild, unmanaged slice of nature. This point touches me. As a Cardiff resident, I’m not a “carpetbagger” (as I’ve been called) who doesn’t understand what’s gained and what’s lost. I have a sentimental soft spot about the way Encinitas used to be, and a desire to preserve undeveloped places. I also regularly run the rail corridor. I watch the seasons change there, marvel at the size of the tumbleweeds, and am impressed by the hardy, weedy castor bean. I love the yellow acacia flowers, and the bursts of purple when the ice plant blooms.
I want the project to have as small a footprint as possible, minimizing concrete and retaining the existing sandstone and vegetation (I know it’s almost entirely invasive, but I like it anyway!). 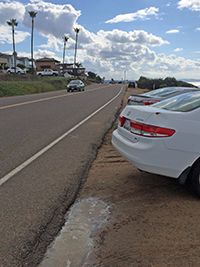 The truth about the rail corridor is that while parts of it are undeniably lovely, it happens to be sandwiched between an increasingly busy railroad, a speeding highway and the San Elijo Ave. thoroughfare. It’s not a sanctuary for kids to play, and it doesn’t serve as a pedestrian or bike trail because it’s too sandy, steep and haphazard, requiring darting into the road and walking your bicycle in places. (The photo shows the need to run or bike into the road because of the parked cars.)
I will work hard to ensure that the natural, un-manicured, picturesque beauty remains in the corridor. We are in discussion about creating an “aesthetics committee” to advise SANDAG on design. That regional agency is designing and building the project. They don’t give us the money to build it, but build it themselves. They haven’t planned a concrete highway, but a Class 1 bike path, paved and entirely separate from cars, in addition to a more natural surface for a running and walking trail.
Contrary to some accusations that the City Council acted in secret with no notice, there have been years of public meetings about this project. SANDAG actually created and presented two full sets of plans – one along the rail corridor and one along Highway 101. The latter option to my mind served an entirely different purpose and didn’t provide the connectivity between Cardiff and Encinitas that the rail-trail option provided.
Financially, the approximate $5.1 million for the rail trail is coming from SANDAG, not our city budget. If they don’t build this project, then that money is lost. It’s not available for other projects, even other projects in the rail corridor, such as rail crossings in Leucadia. City money is funding about $1.5 million for the crossing at Montgomery. The cost of establishing a quiet zone or wayside horns to reduce the horn noise is not yet clear.
My decision to support the rail trail and the crossing was not hasty or ill considered. Like many controversial topics, there are a wide variety of opinions and suggestions. I take public feedback seriously, honestly seeking out the opinions of others and appreciating the values that underlie those views. I read editorials, letters to the editor, emails and postings on social media sites.
I think we have so much to gain with this project. While we don’t know how exactly it will feel until it’s built, I am reassured by the success and sensitivity to community concerns of our other recent city projects. These include the 44-acre Encinitas Community Park; the new concession stand, restroom and overall improvements at Moonlight Beach; and the spacious, inviting Swami’s pedestrian crossing. These are beautiful, heavily-used community assets.
In my heart I believe that the rail trail will be another gem, loved and accepted as one of the amenities that make Encinitas so special.
In continuing service,